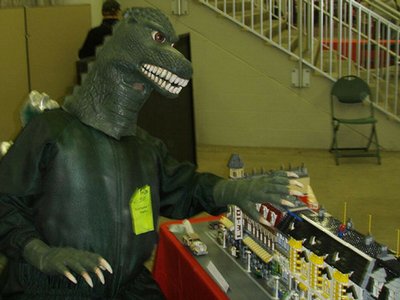 We all have worked with some crazy coworkers. But you won’t believe what some of these coworkers did!!

Comment your craziest coworker story below to get it featured on our blog!

” I have a story about my former coworker, Mark.

Some background: Mark has a Godzilla costume.

Our office is on the same floor as the developmental company responsible for managing the retail campus we’re on.

They have a room in it with all their various awards and a full scale model of the entire campus on a giant table in the middle.

The story: Mark got fired under less than pleasant circumstances.

He went home, got into his Godzilla costume, came back to the office building and stomped THE [CRAP] out of that scale model. I mean LEVELED IT. Really did Godzilla proud that day.”

“There was this… lady at my first job out of college who would sneak away into the lunch room, which was in the basement of the building and steal lunches.

She’d go through all of them taking bites or eating it all. If she took a bit of something she didn’t like, she’d throw it in the garbage. Staff would come downstairs to find their lunches devoured or in the trash with one bit taken out of it.

This all came to a head one day when some guy was up in arms after his meatloaf sandwich fell victim to the.. lunch thief. He ended up catching her, she was fired, and keyed everyone’s cars.”